“It may be that I have stumbled upon an adequate description of life itself.”

These modest yet profound words trumpet an imminent paradigm shift in scientific, economic, and technological thinking. In the tradition of Schrödinger’s classic What Is Life?, Kauffman’s Investigations is a tour-de-force exploration of the very essence of life itself, with conclusions that radically undermine the scientific approaches on which modern science rests–the approaches of Newton, Boltzman, Bohr, and Einstein.

Building on his pivotal ideas about order and evolution in complex life systems, Kauffman finds that classical science does not take into account that physical systems–such as people in a biosphere–effect their dynamic environments in addition to being affected by them. These systems act on their own behalf as autonomous agents, but what defines them as such? In other words, what is life? Kauffman supplies a novel answer that goes beyond traditional scientific thinking by defining and explaining autonomous agents and work in the contexts of thermodynamics and of information theory. Much of Investigations unpacks the progressively surprising implications of his definition. Significantly, he sets the stages for a technological revolution in the coming decades. Scientists and engineers may soon seek to create autonomous agents–both organic and mechanical–that can not only construct things and work, but also reproduce themselves! Kauffman also lays out a foundation for a new concept of organization, and explores the requirements for the emergence of a general biology that will transcend terrestrial biology to seek laws governing biospheres anywhere in the cosmos. Moreover, he presents four candidate laws to explain how autonomous agents co-create their biosphere and the startling idea of a “co-creating” cosmos.

A showcase of Kauffman’s most fundamental and significant ideas, Investigations presents a new way of thinking about the fundamentals of general biology that will change the way we understand life itself–on this planet and anywhere else in the cosmos. 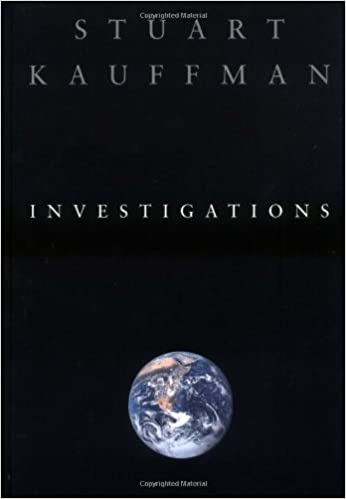